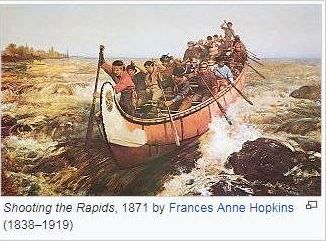 It was a relatively windy day in May. I tried to figure out a great excursion that would bypass the bad gusty spring winds coming off Georgian Bay, funnelling up The French River from the South. Usually, I would try to get out from Hartley Bay Marina to the Bustard Islands on Georgian Bay to hunker down for a few nights this time of year, but not today.

Crossing the treacherous Georgian Bay waves to the Bustard Island’s campsites (approximately four kilometres) would certainly test my solo kayaking abilities on this gusty day. Instead, my goal was to simply connect with nature and to enrich my experience via exploration of The French River. I wanted to explore a spot that keeps away high maintenance travellers, and I was tipped off about a great route by the owner of Hartley Bay Marina, James Palmer.

Upon learning that I could travel down a “lazy river” in late spring with relatively few small rapids and one very small old portage called the Old Voyageurs Channel on the Lower French River, I quickly started planning an exciting three-day excursion from Hartley Bay Marina to the Western Channel of the Lower French River to Georgian Bay, then up through Bass Lake, with my extraction (water taxi) back to Hartley Bay Marina.

This would be a real-world test to see if I could navigate back to my extraction point via Hartley Bay Marina Water Taxi without getting lost. I was excited to explore a back door entrance (James Hartley told me his best kept secrets of these waters!) to an amazing place that would ultimately reach Georgian Bay. 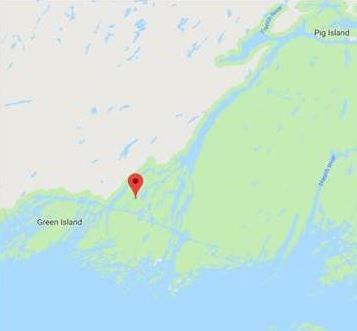 My mission was to mirror the path that Voyageurs took not only physically, but also to try to understand and examine mentally (at least by clues in nature) how people 100 years ago could bypass some treacherous conditions such as rain, wind, bugs, hunger and more.

Did I know suffering? Heck, no! But I do know enough, having been lost and cold and afraid while camping. I know how, when your instinct kicks into survival mode, amazing things can happen. I’ve learned to make educated guesses, and proceed by instinct.  Clues in nature can guide those who choose to listen to what Creator has to offer.

Knowing water does not change its dynamics – that was the only constant I had during this Old Voyageurs journey. Over a hundred years ago, the French and possibly a few indigenous travellers would have shared these same waters, but in much worse and variable conditions. In the real world we don’t really have to use our instincts for many situations outside of our cozy lifestyles.

Learning to use your true instincts is a real-world physical and mental test. Again, what gives me focus gives me strength. I kept telling myself that the Voyageurs would have been driven by instinct and focus to reach their next rendezvous posts. You really feel the travelling souls as you go South West through the Old Voyageurs Channel.

It was essential for me to pack light with my kayak, so I only took a mobile phone, small food supply, and the necessary clothing items. Without the modern convenience items we have for communication, navigation, gear, and instant foods, the voyageurs had to travel with heavy luggage.

As I reached approximately one quarter down the Old Voyageurs channel, past a couple of small rapids onto a lazy river, I almost felt the presence of a large canoe bypassing me - a ghost canoe of 10-12 men barrelling down the calm, relatively portage-free Voyageur Channel with tons of gear. Racing to beat sundown, possibly hunger, and possibly bad weather, every stroke would have been driven by survival. 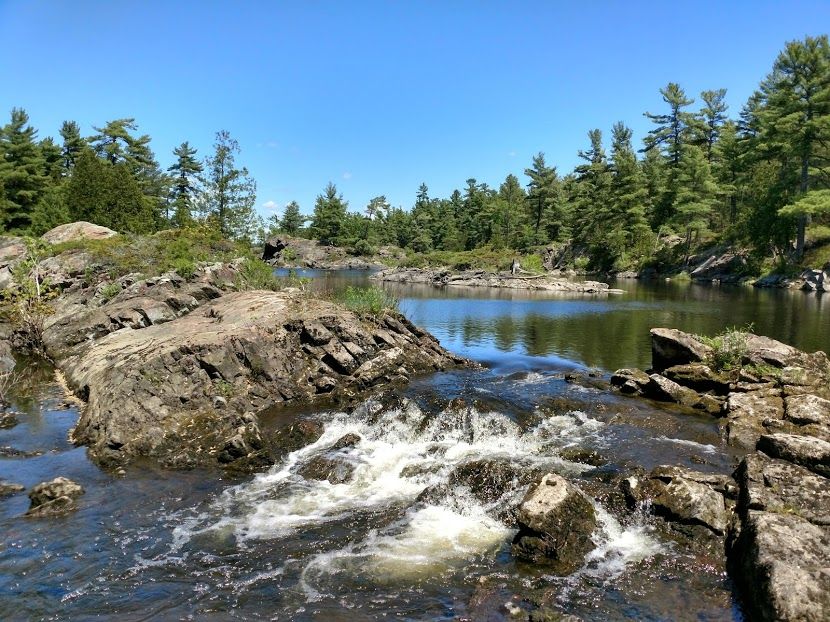 As I glanced at various clearings and features of the channel banks, I could almost imagine the spots at which the Voyageurs would have rested along the edge of the channel...The great glaciers from thousands of years ago and erosion displayed awesome Canadian Shield exposed rock, which is great for landing a canoe. The tall banks of Canadian Shield plateaus also seemed to blanket the channel from gusty winds further south west out into the Bay.

What really piqued my interest were the hidden little bays and tall banks that I passed. What great spots for the Voyageurs to possibly ambush their prey or perhaps hide from being ambushed.

I almost felt as though I was being watched by mystical French or ancient indigenous souls running up and down the plateaus hunting for food, fur, and shelter. I felt the relief of men finally resting and keeping an eye as their wild-caught food seared on a nearby fire. The forest and water surely had a bounty of food – if you knew where to look and had the skill to find it.

However, what really stood out was the absolute calm and dead quiet – no animals, no fish jumping, and surely no rescue if I got lost or captured by a ghost ambush canoe. Could I survive out there for weeks or months on end like they did? Did the first indigenous people live along these awesome banks hundreds of years ago?

As I sat on a bank to have pause for a moment and just listen and daydream, I thought this was an exciting venue from centuries ago. Maybe little settlements would have shared their secrets of fishing and trapping with the Voyageurs. Would the Voyageurs have connected with the locals during this time? It certainly felt like there was a presence of little ancient indigenous communities along these banks.

If not during the Voyageurs’ time, definitely at one time - that is my belief. Who knows if what historians have written of Voyageurs’ accounts are accurate portrayals of real life on these waters? I’ve not read much about the possible suffering that might have occurred and the harsh conditions. However, I have learned that most of the French travellers back then were largely illiterate, so there is very little documentation of their travels, and their accounts might have been largely under exaggerated.

As I took a gulp from my water bottle, sprayed a little Deet 30 on my skin, and checked my phone for work messages, I realized how much I take things for granted. But I pushed on, since I too had to find shelter before sundown.

Finally, I felt a breeze from Georgian Bay as I approached. A few locals waved me on as I passed their cottage. One seemed surprised that I came all this way alone. It felt like a big accomplishment having found my way to Georgian Bay – and I needed reassurance from the locals that I was close.

The rest was easy, out in the bounds of Georgian Bay, which felt like my old stomping grounds. I quickly found one of the many marked campsites sheltered from the bad winds on Georgian Bay and enjoyed a good rest after my accomplishment.

I encourage everyone to explore this invigorating back-door entrance to the Old Voyageurs Channel and let the paddling experience broaden your perspective on one of Canada’s most important Historical Routes. This gave me focus and strength on this trip.