Established by Bill and Cel Palmer, Hartley Bay House and Marina is a family run business that has been servicing the French River Delta and its guests since 1952.   Starting as a restaurant and reception center for cottage  owners and tourists coming in on the train, Hartley Bay Marina, now with road access, has the facilities to accommodate hundreds of tourists who wish to visit the French River Delta area. 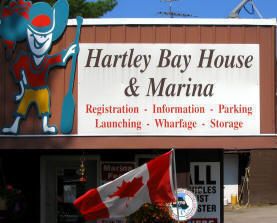 The French River was first made famous in the 1600s by the Voyageurs who were the foundation of  transportation for the fur trade until 1821.  The Northwest Company sent out 200 canoes each year from Montreal to the western part of Lake Superior via the French River.  It took the Voyageurs two months to complete the 1500 mile trip and evidence of them can still be found along the French River corridor today.

Located in North Eastern Ontario, the French River flows for 110 km from Lake Nipissing into the Georgian Bay of Lake Huron and represents many natural features of the Ontario section of the Canadian Shield.  The French River was designated a Provincial Park in 1989 after it officially  became part of the Canadian Heritage Rivers System.  With over 200 km of water courses and channels, the French River incorporates many falls and rapids into its smooth open water design and offers many activities that include fishing, canoeing, kayaking, backcountry camping, boating as well as great photo opportunities for both the novice outdoorsman and experts alike.

Hartley Bay Marina’s hours of operation are from 7AM until 9PM seven days a week. Our season runs from May until the end of October.